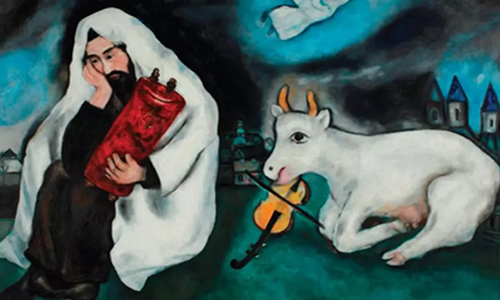 What further can be said of Chagall? Well, as much as the digital world improves efficiency and the sharing of knowledge, there is no substitute for the real thing as such.

I found myself in Safed once again and was determined to imbibe as much of the art as possible. Yet when I found a sole room at Soul Art gallery surrounded by the works of Chagall, Kadishman, Nicky Imber and Ruth Knoft, I lingered for a long time and then passed the rest of the art in a brisk pace and with scant attention. Those artists already are inspiration enough.

What further can be said of Chagall? Well, as much as the digital world improves efficiency and the sharing of knowledge, there is no substitute for the real thing as such. Thus, seeing the prints that the artist’s estate has bequeathed to the gallery to assist in supporting the arts in Israel in actuality is captivating and rejuvenating. With line and hints and dabs of color, the Chagalls impose themselves on the wall. Figures fly in his naive and direct style; squiggles and lines sing and dance; a sense of unity, urgency and harmony pervades these works. Ignited by an energy that hovers on the mystical, one can understand his wide acclaim and the ease with which he understood Fauvism, Expressionism and Surrealism and then, quite remarkably, harnessed such knowledge with his proverbial signature style – his very own language.

Then, in the same room, are various examples of Kadishman, recently deceased, who has also given some paintings to the gallery to help young artists in Israel.

I somehow do not tire of his sheep motif. The artist spent some years in his youth as a shepherd on a kibbutz, and this experience must have made a deep impression on the young man. He repeats the same subject yet with ever-nuanced complexity and verve. His sheep could be emblematic or symbolic of a variety of meanings: as a sacrifice; the pascal lamb; of Israel; of the downtrodden in general; of sublimation of ego; of the capacity to be docile and willing to, as it were, follow the shepherd.

More important is his free use of paint and color, a curious mixture of realism and abstraction. I enjoyed the sheer power he can extract from the subject, as if each sheep has a unique character determined by his use of line and color.

Then there is Imber, a sculptor of tremendous importance in Israel. As a Holocaust survivor, he vowed to dedicate his art to the survival and resurrection of the Jewish people. In fact, there is a short video at the gallery that tells of how he escaped the concentration camp with the use of his art, and then tells of his many projects to uplift and rebuild here in Israel.

The works on offer include the famous image of resuscitation of the Jewish people, symbolized by a young mother holding aloft her child. There is also the enigmatic “wondering Jew” and sculptures where he only shows the hands and the head without a body, but the Torah – in effect saying that while the body may be crushed, the spirit cannot be extinguished. I especially liked the “Moses” as he captures the divine moment where the Ein Sof (Infinite) and the human somehow interface.

Then there are the works of Ruth Knoft, a current artist in Israel who paints the Hebrew letters in a beautiful gold crafted literally from gold, sand and oil paints. The effect is staggering and a treat for the eyes, no less than the mind and heart, as the letters play, sometimes forming words and sentences, amid a mystical, ambient space or within what appears to be the tree of life.