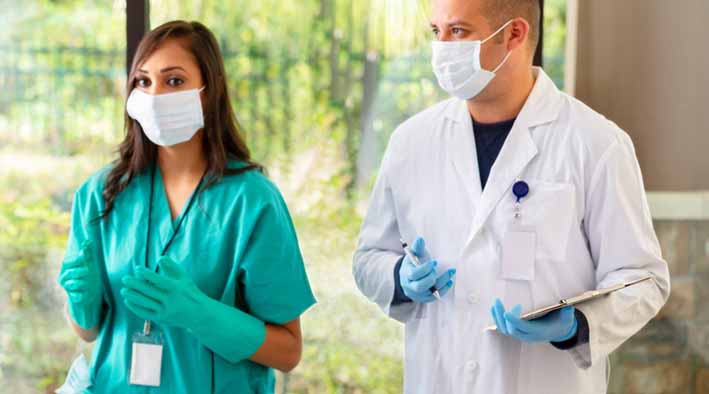 Health care workers around the world can take a five-hour course, created by Stanford emergency physicians, on caring for COVID-19 patients and preventing the spread of the disease. An illustration that appears in COVID-19 Training for Healthcare Workers, a free online course on caring for patients with COVID-19 and preventing the spread of the disease.
Stanford Emergency Medicine International

To aid health care workers in countries with limited resources, Stanford emergency medicine physicians have developed a digital course on caring for COVID-19 patients and preventing spread of the disease.

COVID-19 Training for Healthcare Workers is free and available to anyone with a smartphone or tablet. The five-hour course features short video lectures, study guides and quizzes on COVID-19 care, from proper hand washing to connecting a patient to a ventilator. Since it launched July 17, more than 25,000 people in 143 countries have enrolled in the course.

Matthew Strehlow, MD, associate professor of emergency medicine and director of Stanford Emergency Medicine International, said that most online lessons about COVID-19 care have focused solely on ventilator use. But, he noted, few patients require ventilators, and those who do often fare poorly. “It’s better to prevent patients from needing ventilators,” he said.

Though the Stanford course includes techniques for ventilator use, he said, “We wanted to build a course that focuses on early recognition and management, that keeps the health care workforce safe, that keeps the virus from spreading and that limits the mortality rate.”

The lessons are designed for physicians, nurses, paramedics and community health workers who provide care in many low- and middle-income countries. Health care workers can enroll in the course on Coursera or edX, or download it from Stanford’s Digital MEdIC app, available on ios or Google Play. With the course downloaded, enrollees can take devices to locations without reliable internet service and let practitioners use them to learn the skills.

Physicians from Stanford Emergency Medicine International, a program that aids and educates emergency medicine workers around the world, along with colleagues from other institutions, narrate the 16 videos in the course. They describe the proper ways to put on and take off protective equipment, how to evaluate sick patients, when to put patients on supplemental oxygen and which setting to choose for a patient on a ventilator, among other techniques. As they narrate, the screen displays images such as a chest X-ray, a graph of medication doses, an animation of a patient who’s having difficulty breathing, a video of a medical worker taking off personal protective equipment.

The course includes steps health care workers can take when resources are lacking. For example, the physicians describe how to diagnose shock without ultrasound equipment: by measuring pulse and blood pressure and checking the warmth of the feet and hands, among other techniques. They also recommend that practitioners consider testing for tuberculosis, malaria and other diseases if they are common in their countries.

In the videos, patients and caregivers are often depicted via simple drawings; sometimes the patient is depicted in a more realistic manner in black and white, with generic features that don’t suggest any specific ethnicity.

“We’ve designed it to be as universally applicable as possible,” said Aarti Porwal, managing director of the Stanford Center for Health Education. “When learners don’t identify with people in a training video, they feel like the lessons don’t apply to them.”

The course is currently offered only in English, but its developers are already working on a Spanish translation, with others to follow, Porwal said.

‘We built a broad coalition’

Strehlow said work on the course began in late March. Dozens of his colleagues at Stanford — along with other physicians in Uganda and the United States — volunteered their time to develop the course and narrate the lectures. Digital MEdIC, the Digital Medical Education International Collaborative, is an initiative of the Stanford Center for Health Education that provided illustrators, designers, producers and digital education expertise, with help from other volunteers at Stanford and elsewhere.

“We built a broad coalition,” Strehlow said. “There were a lot of folks who wanted to take this on, and many hands made light work.”

Rory Gilchrist, a project manager who previously worked for Chicago’s public health department, volunteered to coordinate the project. He said he was glad to organize the work of about 40 people, about half of them at Stanford, nearly all also volunteers, to help fight the pandemic.

“We’re overjoyed to support the inspiring work that Stanford physicians are doing,” he said. “They’re generous to share what they know.”

Porwal added that the Stanford Center for Health Education was fortunate to have garnered years of knowledge because it has produced courses for health care workers around the world.

“We’ve been able to take a decade of experience in designing online courses and roll it into this one,” she said. “All the work we’ve been doing helped us quickly produce this extremely relevant course, one that will both resonate with learners and improve health outcomes, the ultimate goal of all of our efforts.”