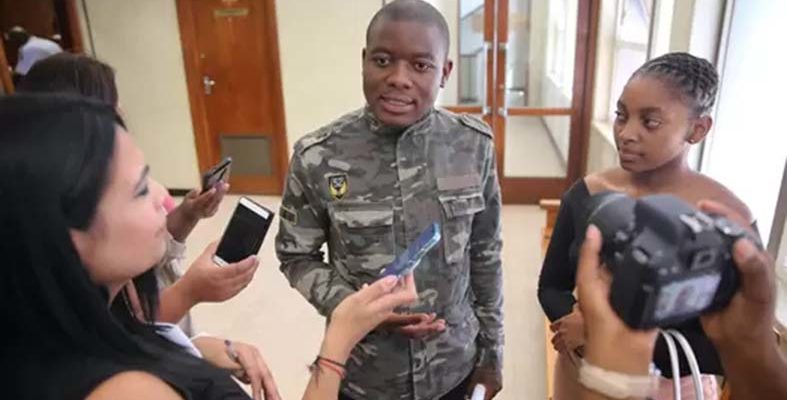 Johannesburg – With pressure mounting on the shoulders of Justice Minister Ronald Lamola to act on the fate of jail-ridden protesting convict Kanya Cekeshe, fellow convicted student Bonginkosi Khanyile said the minister should desist from being a ‘populist demagogue’.

Khanyile, widely known as ‘Education’ in university circles, was convicted on public violence‚ failing to comply with a police instruction and possession of a dangerous weapon (a slingshot), earlier this year.

Along with Cekeshe, who was sentenced to eight years imprisonment for malicious damage to property after he pleaded guilty to setting a police vehicle on fire during the protests.

They are the only convicted students from the countrywide Fees Must Fall protests for free education.

Lamola tweeted on Monday night: “We note the dismissal of both the leave to appeal and bail for fees must fall activists Khaya Cekeshe by the Johannesburg Magistrate Court. We’re in the process of urgently assisting him with an application for presidential pardon or other legally available avenues”.

We note the dismissal of both the leave to appeal and bail for fees must fall activists Khaya Cekeshe by the Johannesburg Magistrate Court. We’re in the process of urgently assisting him with an application for presidential pardon or other legally available avenues

But Khanyile said Lamola was posturing.

“He is just being a typical politican, he is a populist, he is a demagogue. We know him from the ANC Youth League as deputy president, he has always projected himself on the side of the poor.

“Anyone would expect that he understands the issues of young people, but when he assumes office like the rest of the elite, he behaves like them. We have seen him opening radio stations, and doing other things, but it is just the two of us who are convicted for Fees Must Fall, it is something that can be done within a week.

“Kanya filed his application in March 2019, but in August he says he is waiting for a list, what list when it is just Kanya who got convicted in 2017 and got eight years, and myself this year with three years house arrest,” he said.

Khanyile became known as the ‘slingshot protester’ and the ‘king of protests’ after pelting police with stones during the 2016 protests from his Durban University of Technology campus at the height of the protests.

He spent almost six months in jail awaiting trial, until his party, the EFF, took the matter to the Constitutional Court which allowed him to spend Easters with his family, outside of a jail cell.

He was convicted to three years effective house arrest for his part in the protests this year.

Speaking to Independent Media on Tuesday, Khanyile said Cekeshe did not deserve to be in jail and bemoaned police brutality for the violence of the student protests in 2016.

“It’s very saddening because he does not deserve to be there, you can imagine I was there in jail for six months, but he has been there for two years now,” said Khanyile.

Khanyile said the conditions in prison were horrible, pointing out that there prisoners were overcrowded and violent. He said the notion that prisons had become correctional centres was a misnomer.

During his quest for bail in 2016, Khanyile was found to be a ‘brilliant student’ with marks averaging 80% on his academic record, which had been submitted to court at the time.

“There is no government department that advertises that I have not applied to. The stumbling block is the criminal record. I think for the officials it is a case of ‘how do I justify hiring someone with a criminal record when others do not have jobs’,” he said.

Khanyile said if Cekeshe was to eventually get the presidential pardon, it would be meaningless without the criminal record being expunged.

“Yes there was violence, but if you check the violence, it was the police who instigated it. They would come heavily armed on campus and call for people to disperse and when they didn’t, they would shoot us.

“All the violence happened under a political situation, why don’t we open a commission like we did with the TRC [Truth and Reconciliation Commission], because honestly, how do I become a danger to 40 armed police officers when all I have is a slingshot, how do I get convicted of public violence alone in a group of so many people.

“It is the same with Kanya, it only him who was convicted, the charges were clearly politically motivated. He does not deserve to be there. The NPA should be ashamed of themselves, people are looting the state resources and nothing happens to them, the ones who loot billions get bail and walk free,” he said.