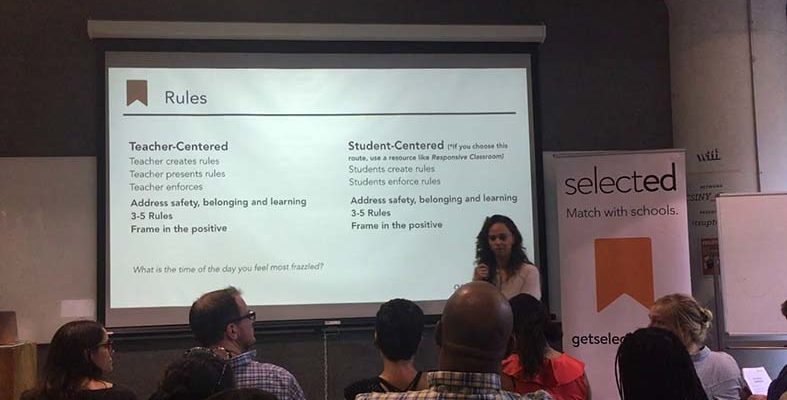 Reference Link
The Hechinger Report is a national nonprofit newsroom that reports on one topic: education. Sign up for our weekly newsletters to get stories like this delivered directly to your inbox.

The Hechinger Report is collaborating with The New York Times to produce Bulletin Board, page 2 of the Times’s education supplement, Learning.

A GED and a college degree, too

Vita Blanco dropped out of high school in ninth grade. She became homeless at 15 when living with her family became impossible. The following year, she moved to Vancouver, Washington, and found a job at Taco Bell working 12-hour shifts to support herself. Her dream of earning a high school diploma faded.

This story also appeared in The New York Times

Blanco, now 40, was among the roughly 27 million adults age 25 or older who don’t have a high school diploma, even as more and more good jobs require college degree.

Fortunately for her, Washington state was trying to solve both those problems simultaneously, by allowing students to earn college credits as they worked toward a high school diploma. The state makes it possible for students who complete an associate degree at any of the state’s 34 community or technical colleges to receive their high school diplomas as well, bypassing the GED exam altogether.

Over the past four years, participation in I-BEST (Integrated Basic Education and Skills Training), one of the programs that helped Blanco, has increased by about 50 percent, with more than 3,200 students now enrolled. And they are earning college credentials at a significant rate. Kentucky, Tennessee and California have similar programs.

Blanco scraped by without her diploma, working long hours in dentists’ offices for close to 20 years while raising two daughters. Two years ago, she took a leap of faith, walked into Clark College and enrolled. Three days later, though, she thought she would have to quit. Her first assignment was to write a paragraph about a half-page book excerpt.

“I was up for hours working on it, looking up words,” she said. “I decided I just wasn’t smart enough.”

But with help from her instructors, she earned her high school diploma and her first college credits six months later.

“I remember when my daughter came to me and asked for help with a school essay,” Blanco said. “For the first time I was able to help her. I was just in awe of that moment.”

In June, she graduated with her associate degree.

“When I walked across that stage, in front of my girls,” she said, “it was everything.”

Supporting students with brain injuries, one campus at a time

In June 2017, weeks after finishing his first year of college at Columbia University, Shariq Jumani was struck by a car while crossing Riverside Drive near campus. Medical staff at Mount Sinai St. Luke’s Hospital told police he would likely die. With his spleen split and skull fractured, Jumani spent 23 days in a coma.

After a year of hospital stays and rehabilitation, Jumani was well enough to resume his studies. This past spring, he founded New York City’s first chapter of Synapse, a national organization started at Stanford University in 2016 to build support groups for those with brain injuries.

At Stanford, athletes who’ve suffered concussions and bicyclists who’ve been in accidents are among the members of Synapse. The Columbia chapter — set to become an official student group this month — will likely include military veterans, as more than 700 are enrolled across its 18 schools.

“Having a brain injury can be extremely isolating,” said Dr. Alissa Totman, who co-founded Synapse while in medical school at Stanford and who’s seen it grow to 16 chapters nationwide, from UCLA to the University of Pittsburgh. “Having access to a social network of other people who have dealt with similar experiences is very beneficial.”

Because many brain injuries are invisible, people don’t always realize — or believe — that a survivor might be struggling.

Coming to terms with his injury and the occasional need to ask for help, Jumani said, is “a long-term process.” His therapist told him it can take years. Jumani’s work with Synapse is helping him, and others, get there.

These playlists aren’t about music

Many teachers today try to give students more say in what and how they learn. One increasingly common way to do this is with “playlists” of activities. Teachers create playlists for students to learn specific topics or complete projects; they may create one list for the entire class or customize it for individual kids. Students work through the material at their own pace. A playlist can be on paper or online, where resources can be found via links, and for any age level. As students work through the playlist activities, teachers monitor their progress, giving supplemental instruction and guidance.

Here’s a composite example from a middle school English class.

Step 3: Choose how to review the information from the video:

Step 4: Complete the mini-quiz online to test your understanding. If you score below 80 percent, go back to Step 3.

Step 5: Get more practice through the Parts of Speech game. When you feel confident in your understanding, move on.

Step 8: If you have extra time, work on your passion project or read a book of your choice.

Pell Grants — federal scholarships for the lowest-income college students — have been reserved for studying toward a bachelor’s degree. But with businesses clamoring for more “medium skill” workers and students eager to pursue technical and vocational certifications, there’s a new push to let Pell Grants be used for shorter educational programs.

A bipartisan bill introduced in Congress in March, called the Jumpstart Our Businesses by Supporting Students (JOBS) Act, would permit Pell Grants to be used for programs of between 150 and 600 instructional hours over eight to 15 weeks, well below the current minimum requirements. Many of these shorter-term programs train students for industries such as manufacturing and auto body repair.

Some worry that short-term programs are not worth the money, but the bill’s supporters say it will only support reputable ones. It requires accrediting agencies to ensure programs are equipping students with the appropriate credentials, and that the programs provide training only for in-demand occupations, as designated by each state.

“We’re trying to bring some direction and some guidance to students and institutions about which credentials have value and which don’t,” said Kermit Kaleba of the National Skills Coalition, which supports the bill.

Policy experts believe the JOBS bill will move forward only as part of a reauthorization of the Higher Education Act, which provides federal aid for postsecondary education. The act was last reauthorized in 2008, although Lamar Alexander, chairman of the Senate Committee on Health, Education, Labor and Pensions, has stated he wants to get that done this year.

Free college, even for adults

The tuition-free-college movement has been taking hold throughout the country, but one group of students is being left out — adults.

Even though nearly 70 percent of Americans age 25 or older lack a college degree, most of the 300 free Promise programs across 44 states don’t allow them to enroll. Many programs also make it difficult for adults by requiring students to go full-time; it’s tough to balance work and family responsibilities while carrying a full course load. (Close to four million undergraduate students have children, and 40 percent of them are single mothers.)

Most states have established goals for graduating more college students, as employers are scrambling to find enough workers with degrees. But even if the entire current crop of high school students made it to and through college, many states would fall short of the number of college graduates they need.

“Giving adults access to college is important to the country as a whole, not to mention their families’ and children’s chances of success,” said Lindsey Reichlin Cruse, the study director at the Institute for Women’s Policy Research.

Some states are recognizing the gap and changing their approach. Last year, Tennessee began offering adults, including those who go part-time, free tuition at all of its community colleges. Hawaii’s program is also open to adults, and next year Washington state will open its Promise program to low- and middle-income adults over age 25.

If other states want to keep their economies growing, Reichlin Cruse said, they may need to follow suit.

This story about high school diplomas was produced by The Hechinger Report, a national nonprofit newsroom that reports on one topic: education. Sign up for our weekly newsletters to get stories like this delivered directly to your inbox.