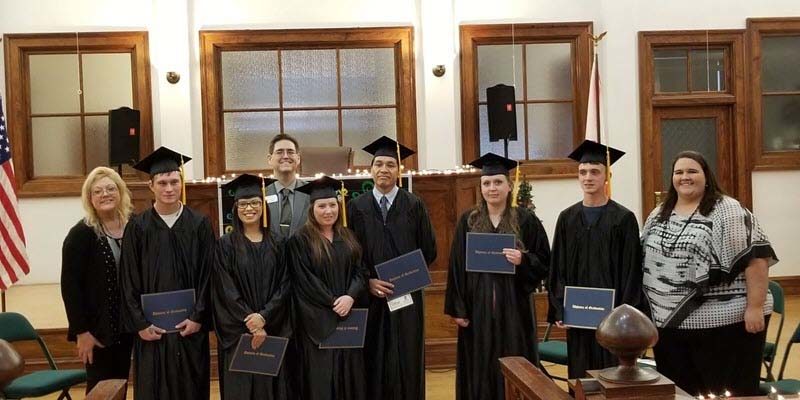 Although most high school graduations in metro Atlanta took place last month, one that was long overdue for seven students happened Thursday evening at, of all places, a library.

The women, who for various reasons didn’t obtain a high school diploma in their teens, donned caps and gowns to get that elusive sheepskin at the Gwinnett County Public Library in Lilburn. The library system offers a free online program where students over 19 can take classes and receive a certified diploma instead of a GED.

For Vickie Harris, the nearly 45 years since high school had weighed on her.

“I tried GED programs at Lanier Tech and Gwinnett College but those didn’t work for me,” she said.

Related story: What do teachers do over summer break?

She was doing research at the Lawrenceville branch when she saw a poster about the Career Online program.

“I had health problems and the online class was very convenient,” she said.

In a year’s time, she did what she hadn’t been able to do decades previously.

“Our school was the last was to be desegregated and I didn’t like the new school,” said the 62-year-old. “I got pregnant in 10th grade so I was glad to drop out.”

While raising four children, she ran a hair salon and a personal home care business.

Her grandmother passed away two years ago at 95. She was 47 when she finally got her high school diploma, and Harris said that was the inspiration that kept her going.

Now that she’s made that leap, Harris is no longer among the 14 percent of Georgians over 25 who don’t have a high school diploma. According to the most recent Census figures, that number is slowly decreasing but Georgia still lags behind the U.S. as a whole, which is at 13 percent.

That’s one of the reasons the Gwinnett library system started the Career Online High School.

It differs from a GED program in that students receive an actual high school diploma. One of the most significant differences between a GED and a diploma is the fact that some colleges, institutions and organizations require a high school diploma and may not accept the GED, said Charles Pace, the library system’s executive director.

“We started this three years ago with the hopes of making an impact on the community,” he said. “Studies have shown that people with a high school diploma have better health, more income and other factors that lead to a better quality of life.”

In addition to providing a high school diploma, the library helps students earn a career certificate and complete additional job-preparation documents and training. The only requirements are that you have a library card, are at least 19 and have completed eighth grade.

It takes most students about 18 months to complete the courses, but Jane Mai did it in a year.

“I love studying and this was so easy,” said the 40-year-old wife and mother. Mai and her family emigrated to the United States four years ago from Vietnam. She had a six-month-old daughter when she decided to further her education and didn’t see how attending classes at a brick-and-mortar building would have been possible.

“I had to take care of my children and my household,” she said referring to her school-age daughter and husband. “With online classes, I was able to do everything — even though it was very tiring!”

Mai has been accepted to Georgia State University where she’ll pursue a career in the medical field. She’s torn between nursing and sonography.

“I might try both and see which fits me better,” she said.

It’s success stories like Harris and Mai that make this program a success, said Pace. To date, it has had 31 graduates with the last class consisting of 13. Not all of those graduates made it to the ceremony, which wasn’t mandatory.

Besides offering free tuition, the library allows students to check out laptops and personal hotspots for the duration of the program. Students are also given community mentors to help them, as well as book-a-librarian appointments, which help students with anything from basic Microsoft help to career development.

The library is essentially the facilitator of the program. It recruits and interviews candidates, supplies them with an academic mentor and provides qualified and certified instructors.

Funding comes from the general library budget, plus donations from community partners and an annual gala called “Puttin’ on the Litz.”

“It’s never too late to do the right thing,” said Harris as she hugged her pastor, the Rev. JoeAnn Malone of Salvage Baptist Church. “I hope I inspire my 10 grandchildren and two great-grandchildren and show them how important education is.”

Harris has already completed three semesters at Walden University and has dreams of becoming a psychologist.

“I’ve been through a lot emotionally, physically and spiritually and I have a lot to give to others.”